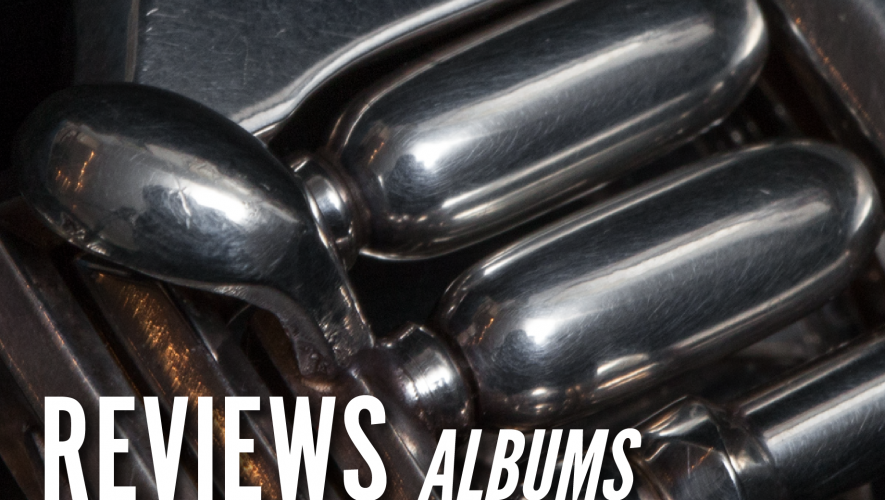 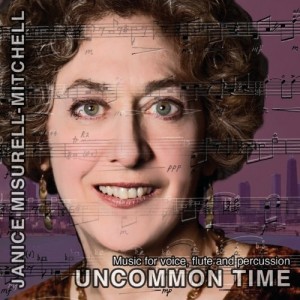 “When I first saw the title of Janice Misurell-Mitchell’s newly released CD, Uncommon Time: Music for Voice, Flute, and Percussion, I wasn’t sure what to expect, and I certainly wasn’t prepared for what I heard. The disc is an exciting anthology of Misurell-Mitchell’s work as a composer, flutist, and vocalist, combining the styles of avant-garde singer Cathy Berberian and flute extended-techniques guru Robert Dick to create a fresh-sounding collection of performances…Misurell-Mitchell’s excellence as both a performer and composer is showcased on Uncommon Time and her music sounds fresh and timeless. The CD fully exploits the infinite variety of sound and expression via the conduit of the human voice; the use of flute and percussion only broadens the spectrum, rather than competing with it.” —Pamela Murchison, IAWM Journal (full review here)

“As evidenced in her playing and composing, Misurell-Mitchell is an immensely multi-talented woman. She and her colleagues on this recording  deliver flawless performances. Misurell-Mitchell’s aesthetic is rather experimental…and she imagines new ways of involving the flute in performance. It is a very specific style but it is done incredibly well. Kudos to her for engaging such talented artists for this recording project and for the creative work she has undertaken.” —Nicole Riner, The Flutist Quarterly (full review here)

“Misurell-Mitchell, a multifaceted composer, flutist, performance artist and stalwart of the CUBE Contemporary Chamber Ensemble, cuts loose with this sometimes arresting, often outrageous, always entertaining collection of avant-gardish pieces for voices, flute and percussion. Her fearless channeling of the great Cathy Berberian in “Are You Ready?” has to be heard to be disbelieved.” —John von Rhein (jvonrhein@tribune.com)

“[This anthology] is quite an unusual presentation as Janice recites poetry, sings, plays her flute and vocalizes thru her flute to add character to her music. This is a different form of blues marrying various techniques to arrive at a unique presentation. Misurell-Mitchell is a vibrant and courageous performer that is dynamic and at time startling. The set includes a couple of live recordings notably “Are You Ready” a magical vocal solo.” —D. Oscar, O’s Place Jazz Magazine do homework for me (OG@osplacejazz.com) 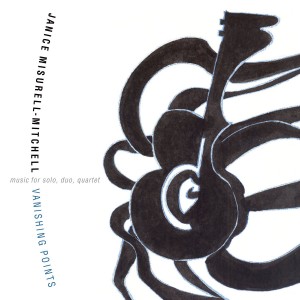 “While nowadays it’s pretty much common practice for music to be poly-stylistic, it’s still somewhat rare for music to completely internalize multiple musical languages from various genres and spew them back out into something that is ultimately untranslatable into anything else besides itself. But the music of Chicago-based Janice Misurell-Mitchell seems to do just that, seamlessly weaving elements from high modernism with jazz, Latin, blues, and even funk into an amalgam that is completely its own thing…”  —Frank J. Oteri, New Music Box

“…Written for a variety of instrumental combinations, the pieces are linked by a sense of intensity, even danger… Misurell-Mitchell continually changes and transforms musical motives through fragmentation, wide dynamic contrasts, and repetition… Her style draws upon gestures from rock and jazz, in addition to classical approaches, and it engages the listener’s attention and imagination… Vanishing Points offers an intense but pleasurable experience in sound, imagination, and emotional depth.” —Carol Shansky, IAWM Journal (full review here)

“Composer and flutist Janice Misurell-­Mitchell…represents the old guard of Chicago’s new-music community. But her latest portrait album proves that there’s nothing outdated or musty about her work. On the aptly titled Agitacion, vibraphone and drum kit alternately intersect and propel Winston Choi and Abraham Stokman’s jagged piano lines, and “Dark Was the Night,” performed by guitarist Maria Vittoria Jedlowski, takes inspiration from the Blind Willie Johnson classic referenced in its title, and its bracing, splintery gestures owe as much to Derek Bailey as to the blues.” —Peter Margasak, Chicago Reader

“There’s no shortage of composers out there merging elements of jazz, popular and folk music with the Western classical music tradition, but few have the ability to wrangle something entirely new from this merging.  By combining impressive compositional chops with a highly articulated personal vision, Misurell-Mitchell has brought something new, and uniquely beautiful, into the world with this album… This is more than music, it is truly a total art form for our century, full of potency and rich expressive power.  It may change through the vanishing point of our perspective but no matter how you hear it, it will move you.” —liner notes, Seth Boustead

“…Janice is a talented Chicago-based contemporary jazz artist with spoken word, vocals and flute as her featured elements. Vanishing Points is her latest release, a collection of eclectic free flowing music performed solo, in duos and quartet. Misurell-Mitchell’s compositions are intriguing, capturing the listener’s imagination and then pushing it to the edge…” —D. Oscar, O’s Place Jazz Magazine OG@osplacejazz.com